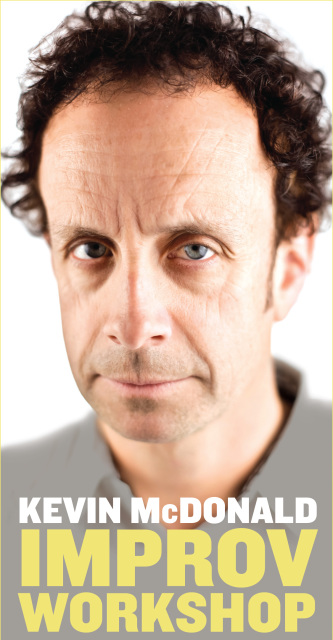 Here's what Kevin says about the workshop!

It's a workshop where I teach students the Kids in the Hall method of writing sketches through improv. On Saturday, the class would be from 10am to 5:30PM. I start the day with talking about the basics of sketch comedy and comedy writing. Then I teach the students, the old Kids in the Hall method of writing comedy sketches through improv. We follow that by playing warm up games that lead them into thinking naturally about writing and performing at the same time. Then I split the class into groups and get each group to improvise a scene. After each scene we talk about them, give notes and figure out how the scenes could develop into a whole sketch. Then when all the improvised scenes are done, each group and I work all day to turn every scene that was improvised, into a fully developed comedy sketch. By the end of the day, we will have 4 to 7 completely new sketches. But for the two day students, Saturday is a warm up for Sunday's workshop.

And on Saturday at the end of that workshop, I would give the 2-day students, homework - They would come back on the Sunday with 2, one line premises for sketches, like - "What if a guy was $10 short of being a millionaire". We would work all afternoon into making them into full sketches. This workshop would also go from 10 to 5:30ish. All the students would be in at least one scene. So the students who do the two day workshop would be doing an advancement of the workshop, I did on Saturday. But it's the Sunday scenes that get in the show.